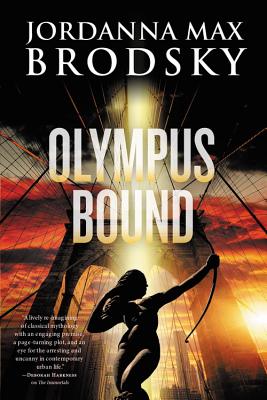 By Jordanna Max Brodsky
$15.99
Email or call for price

This is book number 3 in the Olympus Bound series.

To save her father Zeus, king of the Gods, Selene must leave her adopted Manhattan home and travel to Mount Olympus to defeat the cult that seeks to destroy the Greek pantheon in the concluding volume of this modern day "lively re-imaging of classical mythology." (Deborah Harkness)

Summer in New York: a golden hour on the city streets, but a dark time for Selene. She's lost her home and the man she loves.

A cult hungry for ancient power has kidnapped her father and targeted her friends. To save them, Selene must face the past she's been running from -- a past that stretches back millennia, to when the faithful called her Huntress. Moon Goddess. Artemis.

With the pantheon at her side, Selene must journey back to the seat of her immortal power: from the streets of Rome and the temples of Athens -- to the heights of Mount Olympus itself.

"Rich, clever, and thoughtful.... Brodsky expertly weaves together ancient mystery cults, mythology, and science, producing a syncretic masterpiece that challenges the reader's assumptions and expectations at every turn."—Publishers Weekly on Olympus Bound

"Intense and compelling.... Brodsky has delivered a terrific series that brings mythology to life as the gods struggle to survive in the modern reality. Great stuff!"—RT Book Reviews on Olympus Bound

"Moves quickly from nail-biting predicament to battle and back.... Will delight readers who are mythology nerds."—Kirkus on Olympus Bound

"The Immortals is a lively re-imagining of classical mythology with an engaging premise, a page-turning plot, and an eye for the arresting and uncanny in contemporary urban life."—Deborah Harkness, New York Times bestselling author of A Discovery of Witches, on The Immortals

"Imaginative and fast-paced, The Immortals is pulse-pounding entertainment."—Kevin O'Brian, New York Times bestselling author of No One Needs to Know, on The Immortals

"Brodsky's writing has claws...They sink in with the first word and don't let go until you are finished with the book."—Darynda Jones, New York Times bestselling author, on The Immortals

"Irresistible...a page-turner that deftly weaves action, romance, and a dash of intellectual heft into one seamless whole."—Dustin Thomason, New York Times bestselling author, on The Immortals

"Painstakingly researched, intellectually complex, and deeply rooted in the history and mythology of Ancient Greece, The Immortals is a richly imaginative, multi-layered tale that stimulates the heart and the mind in equal measure."—Ian Caldwell, New York Times bestselling author, on The Immortals

"This series launch is a wonderful choice for fans of Greek myths and urban fantasy readers looking for something different."—Library Journal (starred review), on The Immortals

"Brodsky's thriller feeds on the long-held love of Greek mythology in a reimagined, present-day world where gods and goddesses still walk among us."—Booklist on The Immortals

"Thrumming with life."—B&N.com on The Immortals