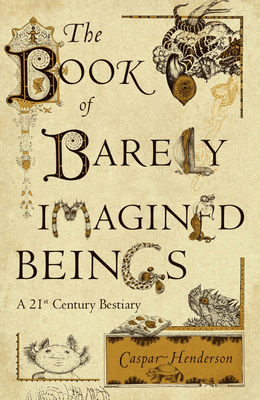 By Caspar Henderson
Email or call for price.
Hard to Find - Not currently available to order

From medieval bestiaries to Borges’s Book of Imaginary Beings, we’ve long been enchanted by extraordinary animals, be they terrifying three-headed dogs or asps impervious to a snake charmer’s song. But bestiaries are more than just zany zoology—they are artful attempts to convey broader beliefs about human beings and the natural order. Today, we no longer fear sea monsters or banshees. But from the infamous honey badger to the giant squid, animals continue to captivate us with the things they can do and the things they cannot, what we know about them and what we don’t.

With The Book of Barely Imagined Beings, Caspar Henderson offers readers a fascinating, beautifully produced modern-day menagerie. But whereas medieval bestiaries were often based on folklore and myth, the creatures that abound in Henderson’s book—from the axolotl to the zebrafish—are, with one exception, very much with us, albeit sometimes in depleted numbers. The Book of Barely Imagined Beings transports readers to a world of real creatures that seem as if they should be made up—that are somehow more astonishing than anything we might have imagined. The yeti crab, for example, uses its furry claws to farm the bacteria on which it feeds. The waterbear, meanwhile, is among nature’s “extreme survivors,” able to withstand a week unprotected in outer space. These and other strange and surprising species invite readers to reflect on what we value—or fail to value—and what we might change.

A powerful combination of wit, cutting-edge natural history, and philosophical meditation, The Book of Barely Imagined Beings is an infectious and inspiring celebration of the sheer ingenuity and variety of life in a time of crisis and change.

Caspar Henderson is a writer and journalist whose work has appeared in the Financial Times, the Independent, and New Scientist. He lives in Oxford, UK.

“The Book of Barely Imagined Beings is one that Pliny would have envied, Darwin applauded, and Borges relished. It celebrates the playful imagination of the universe, capable of dreaming up the zebrafish and the yeti crab; it also celebrates our delight in reading in claws and feathers lessons about our own miraculous self. In these days of doom and gloom, I can think of nothing more rejoicing than Caspar Henderson’s magical book.”
— Alberto Manguel, author of The Library at Night

“Wondrous, capacious and strange.”
— Simon Critchley, author of The Book of Dead Philosophers

“If you’re interested, as I am, in weird details about weird animals, this is the book for you. Caspar Henderson takes us on an eye-opening tour of real animals that no sane human could ever have invented.”
— Frans de Waal, author of The Age of Empathy

“A sublime rumination on existence. In twenty-seven exquisitely crafted cameos, Caspar Henderson reveals the hidden wonders of life in all its exuberant strangeness, at the same time illuminating our own place in the world. Simply stunning.”
— Callum Roberts, author of Ocean of Life

“Caspar Henderson is a zoological Borges, taking us on a fascinating and exhilarating journey through the labyrinth of natural history. This book is a brilliant and original meditation on what the animal world can teach us about who we are and who we want to be. It weaves an unforgettable spell.”
— Roman Krznaric, author of The Wonderbox

“A wonderful book! With the precision of a scientist, the elegance of an artist, and the minatory power of an Old Testament prophet, Caspar Henderson exhorts us to pay attention to the other species on our endangered planet and learn from them before it is too late.”
— Richard Holloway

“An utterly extraordinary book: a glorious and genre-bending grimoire; a spell-book of species that entranced me from its first page. Wonderful in the richest senses of the word, as well as witty, moving, urgent, and beautiful.”
— Robert Macfarlane, author of The Wild Places and The Old Ways

“A rich mixture of science, mythology, and literature, whose plethora of entertaining digressions left me impressed.”
— Richard Fortey, author of Horseshoe Crabs and Velvet Worms

"Tangentially inspired by Jorge Luis Borges’s Book of Imaginary Beings, and assembled like a cabinet of curiosities, journalist Caspar Henderson’s first book highlights what nonhuman species reveal about being human. The disarmingly human face of the Axolotl salamander introduces a reflection on evolution, which wanders into the history of the Spanish conquest of Mexico, before landing on the question of what the Axolotl’s ability to regenerate limbs can reveal about stem cells. It’s an oddly anthropomorphic argument to abandon anthropomorphism, but as exotic salamanders and transparent octopi give way to miniscule water bears, whiskered owlets, and the honey badger, Henderson’s contagious awe of life effortlessly advances his argument. The captivating habits of these beings are given significant scientific backbone, before digressing into a free-flowing discourse."
— Publishers Weekly

“Present knowledge, together with environmental trouble, make it a natural time to update the bestiary in writing, and to tour nature’s brilliance in light of honest science. That’s exactly what the English author Caspar Henderson has done with his The Book of Barely Imagined Beings: A 21st Century Bestiary.”
— New Yorker

"This readable volume will appeal to the serious reader with broad interests in science, mythology, folklore, and speculation on questions of the human condition."
— Library Journal

“Book of the year.”
— Blackwell's Bookshop

“When it comes to nature, the truth is often stranger and more wondrous than fiction, especially in Caspar Henderson’s Book of Barely Imagined Beings. The book illustrates the weird and wild histories of unusual—but real—species, including human beings, offering the reader elaborate illustrations, annotations, and much lore. And lurking in the margins is Henderson’s suggestion that just as a medieval bestiary’s mythical monsters reveal the values of a bygone era, the creatures that fascinate us today reveal much about us.”
— Nature Conservancy

“As humanity begins to grapple with the likelihood of extraterrestrial life, we’re also reaching a fuller understanding of just how alien organisms can be right here on Earth. It is against this backdrop that Caspar Henderson offers The Book of Barely Imagined Beings, an illustrated, alphabetical compendium of some of the weirdest, wildest forms of life on Earth. . . . Henderson approaches his material with a deep respect for evolutionary science and a sophisticated understanding of the ways humans have tried to make sense of the natural world and our place in it.”
— Bookforum

"A beautiful work that celebrates Earth's extraordinary species, with the look and feel of a Victorian treatise.”
— Nature

“With illumination-style flourishes, hand-drawn illustrations, and in-margin notes, from a purely aesthetic and bibliophilic point of view, The Book of Barely Imagined Beings is as magical as its name suggests. . . . Both aesthetically pleasing and scientifically intriguing, it would make an inspiring addition to any natural history collection.”
— Evolve Magazine, Natural History Museum