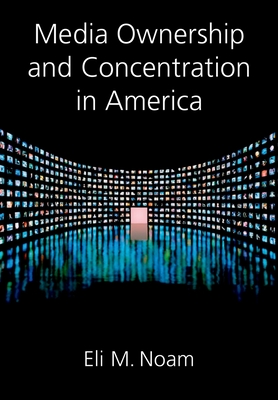 The concentration of private power over media has been the subject of intense public debate around the world. Critics have long feared waves of mergers creating a handful of large media firms that would hold sway over public opinion and endanger democracy and innovation. But others believe
with equal fervor that the Internet and deregulation have opened the media landscape significantly. How concentrated has the American information sector really become? What are the facts about American media ownership? In this contentious environment, Eli Noam provides a comprehensive and balanced survey of media concentration with a methodical, scientific approach. He assembles a wealth of data from the last 25 years about mass media such as radio, television, film, music, and print publishing, as well as the
Internet, telecommunications, and media-related information technology. After examining 100 separate media and network industries in detail, Noam provides a powerful summary and analysis of concentration trends across industries and major media sectors. He also looks at local media power, vertical
concentration, and the changing nature of media ownership through financial institutions and private equity. The results reveal a reality much more complex than the one painted by advocates on either side of the debate. They show a dynamic system that fluctuates around long-term concentration
trends driven by changing economics and technology. Media Ownership and Concentration in America will be essential reading and a trove of information for scholars and students in media, telecommunications, IT, economics, and the history of business, as well as media industry professionals, business researchers, and policy makers around the world.
Critics and defenders of media trends alike will find much that confirms and refutes their world view. But the next round of their debate will be shaped by the facts presented in this book.