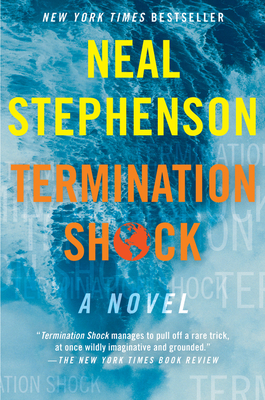 “Stephenson turns his considerable talent for world-building to our near future. His mix of wit, science, and suspense creates a story of queens, cowboys, and soldiers entangled in the last-ditch effort to save humanity or doom it.”
— Greg Cass, Harvard Book Store, Cambridge, MA

From Neal Stephenson—who coined the term “metaverse” in his 1992 novel Snow Crash—comes a sweeping, prescient new thriller that transports readers to a near-future world in which the greenhouse effect has inexorably resulted in a whirling-dervish troposphere of superstorms, rising sea levels, global flooding, merciless heat waves, and virulent, deadly pandemics.

“Stephenson is one of speculative fiction’s most meticulous architects. . . . Termination Shock manages to pull off a rare trick, at once wildly imaginative and grounded.” — New York Times Book Review

One man—visionary billionaire restaurant chain magnate T. R. Schmidt, Ph.D.—has a Big Idea for reversing global warming, a master plan perhaps best described as “elemental.” But will it work? And just as important, what are the consequences for the planet and all of humanity should it be applied?

Ranging from the Texas heartland to the Dutch royal palace in the Hague, from the snow-capped peaks of the Himalayas to the sunbaked Chihuahuan Desert, Termination Shock brings together a disparate group of characters from different cultures and continents who grapple with the real-life repercussions of global warming. Ultimately, it asks the question: Might the cure be worse than the disease?

Epic in scope while heartbreakingly human in perspective, Termination Shock sounds a clarion alarm, ponders potential solutions and dire risks, and wraps it all together in an exhilarating, witty, mind-expanding speculative adventure.

Neal Stephenson is the bestselling author of the novels Reamde, Anathem, The System of the World, The Confusion, Quicksilver, Cryptonomicon, The Diamond Age, Snow Crash, and Zodiac, and the groundbreaking nonfiction work In the Beginning . . . Was the Command Line. He lives in Seattle, Washington.

"This book is the rare climate thriller that's realistic about political stonewalling in the face of disaster yet unafraid to imagine a possible future where people might actually come together and try to save civilization. The kind of climate-change fiction we all need." — Kirkus Reviews (starred review)

“The novel is classic Stephenson: fiercely intelligent, weird, darkly witty, and boldly speculative. . . . Stephenson has become one of the most revered science fiction writers of his time.”  — Publishers Weekly

"An enthralling and thought-provoking read." — Buzzfeed

"Neal Stephenson has never been afraid of engaging with big ideas within genre forms, and Termination Shock might be his most visionary, and timely, book yet." — Chicago Review of Books

"Stephenson is one of speculative fiction’s most meticulous architects. . . .Termination Shock manages to pull off a rare trick, at once wildly imaginative and grounded.” — New York Times Book Review

"Arguably no sci-fi writer has the specific combination of vision, reach, and ardent fandom that Stephenson does . . . . He is the premiere chronicler of the foundation myths of Silicon Valley and its adjacent culture—of its high self-regard, of disruptive innovation, of the world that nerds built.” — Wired

“Raises genuinely interesting issues about the geopolitics of a warming world.” — American Purpose

“Stephenson isn’t just playing with words, he’s playing with ideas, and he isn’t joking either. He is sci-fi’s great contrarian, and Fall deserves to be rated as one of the great novels of our time, prophetically and philosophically.” — Wall Street Journal on Fall; or, Dodge in Hell

“A one-of-a-kind synthesis of daring and originality, unafraid to venture into wild and unmapped conceptual territory.” — New York Times Book Review on Fall; or, Dodge in Hell

“Fall is at once science fiction and fantasy, with quantum computing enabling what amounts to magic, and while Stephenson spins out a pleasingly plausible vision of our near future, he carves out his most comfortable position in the uncertain nexus where that future becomes past and we rewrite our own apocrypha. Vintage Stephenson, which is to say it’s like nothing he’s ever written.”  — Wired

“Stephenson devotees with a taste for Tolkienesque fantasy will revel in the author’s imaginative world building . . . . Still, there are enough futuristic, envelope-pushing ideas here, especially related to AI and digital consciousness, to keep even nonfans and science buffs intrigued.” — Booklist [starred review] on Fall; or, Dodge in Hell

“There’s a lot going on here—stylistic flourishes, comedic pratfalls, romance and science—but it’s handled deftly. Those familiar with Stephenson will recognize his humor and ideas.”  — Washington Post on The Rise and Fall of D.O.D.O.