The Man Who Sold America: Trump and the Unraveling of the American Story (Paperback) 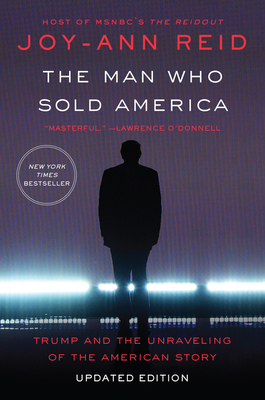 MSNBC'S Joy-Ann Reid calculates the true price of the Trump presidency and charts the road to Congress's impeachment investigation, now updated with a new afterword.

"The host of AM Joy on MSNBC argues that President Trump’s administration is characterized by grift and venality that demeans the office and diminishes America.” —New York Times Book Review

Is Donald Trump running the “longest con” in U.S. history? How did we get here? What will be left of America when he leaves office?

Candidate Trump sold Americans a vision that was seemingly at odds with their country’s founding principles. Now in office, he’s put up a “for sale” sign—on the prestige of the presidency, on America’s global stature, and on our national identity. At what cost have these deals come? Joy-Ann Reid's essential new book, The Man Who Sold America, delivers an urgent accounting of our national crisis from one of our foremost political commentators.

Three years ago, Donald Trump pitched millions of voters on the idea that their country was broken, and that the rest of the world was playing us “for suckers.” All we needed to fix this was Donald Trump, who rebranded prejudice as patriotism, presented diversity as our weakness, and promised that money really could make the world go ’round.

Trump made the sale to enough Americans in three key swing states to win the Electoral College. As president, Trump’s raft of self-dealing, scandal, and corruption has overwhelmed the national conversation. And with prosecutors bearing down on Trump and his family business, the web of criminality is circling closer to the Oval Office. All this while Trump seemingly makes his administration a pawn for the ultimate villain: an autocratic former KGB officer in Russia who found in the untutored and eager forty-fifth president the perfect “apprentice.”

What is the hidden impact of Trump, beyond the headlines? Through interviews with American and international thought leaders and in-depth analysis, Reid situates the Trump era within the context of modern history, examining the profound social changes that led us to this point.

Providing new context and depth to our understanding, The Man Who Sold America reveals the causes and consequences of the Trump presidency and contends with the future that awaits us.

Joy-Ann Reid is a political analyst for MSNBC and the host of The ReidOut. She is the author of Fracture: Barack Obama, the Clintons, and the Racial Divide and co-editor (with E. J. Dionne Jr.) of We Are the Change We Seek: The Speeches of Barack Obama. A graduate of Harvard University, she is the former managing editor of TheGrio.com, and her columns and articles have appeared in the New York Times, New York magazine, the Guardian, the Miami Herald, and Salon.com. She lives in Brooklyn, New York, and Maryland.

“Joy Reid masterfully combines the immediacy of news reporting, the intimacy of memoir, and the sweep of a history book—from the anti-immigrant Know Nothing Party of the 1850s to Nelson Mandela’s post-apartheid attempt at ‘reconciliation.’ The Man Who Sold America delivers a compelling account of how we got to Trumpism and what will happen next.”
— Lawrence O’Donnell, host of MSNBC’s The Last Word with Lawrence O’Donnell

“Passionate, smart, and breathtakingly original, The Man Who Sold America will explain Trump to readers for years to come.”
— Michael Tomasky, contributing opinion writer, The New York Times; editor, Democracy: A Journal of Ideas; and author of If We Can Keep It: How the Republic Collapsed and How It Might Be Saved

“The political analyst and host of AM Joy on MSNBC argues that President Trump’s administration is characterized by grift and venality that demeans the office and diminishes America.”
— New York Times Book Review, “New & Notable”