The Decent Proposal: A Novel (Paperback) 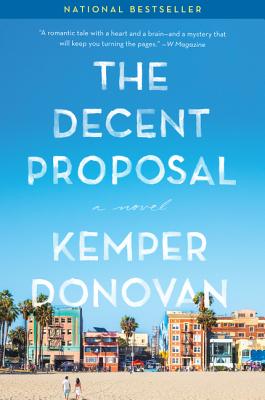 By Kemper Donovan
$15.99
Email or call for price

“A sharp, wise, and hilarious novel. Think Entourage meets Tom Wolfe with a touch of Indecent Proposal. . . . We loved it!” — Lucy Sykes & Jo Piazza, authors of The Knockoff

An addictively readable romantic comedy, drama, and mystery rolled into one, about two very different strangers whose lives become intertwined when they receive an unusual proposition. The Decent Proposal is a funny, tender, and enchanting story about love, attraction, and friendship: Jane Austen in Los Angeles.

A struggling Hollywood producer, Richard Baumbach is twenty-nine, hung-over, and broke. Ridiculously handsome with an innate charm and an air of invincibility, he still believes good things will come his way. For now he contents himself with days at the Coffee Bean and nights with his best friend Mike (that’s a woman, by the way).

At thirty-three, Elizabeth Santiago is on track to make partner at her law firm. Known as “La Máquina” The Machine—to her colleagues, she’s grown used to avoiding anything that might derail her quiet, orderly life. And yet recently she befriended a homeless man in her Venice neighborhood, surprised to find how much she enjoys their early-morning chats.

Richard and Elizabeth’s paths collide when they receive a proposal from a mysterious, anonymous benefactor. They’ll split a million dollars if they agree to spend at least two hours together—just talking—every week for a year. Astonished and more than a little suspicious, they each nevertheless say yes. Richard needs the money and likes the adventure of it. Elizabeth embraces the challenge of shaking up her life a little more. Both agree the idea is ridiculous, but why not?

What ensues is a delightful journey full of twists, revelations, hamburgers, classic literature, poppy music, and above all love, in its multitude of forms. The Decent Proposal is a heartfelt and often hilarious look at the ties that bind not just a guy and a girl but an entire, diverse cast of characters situated within a modern-day Los Angeles brought to full and irrepressible life.

Kemper Donovan has lived in Los Angeles for the past twelve years. A graduate of Stanford University and Harvard Law School, he worked at the literary management company Circle of Confusion for a decade, representing screenwriters and comic books. He is also a member of the New York Bar Association.

“A romantic tale with a heart and a brain—and a mystery that will keep you turning the pages.”
— W Magazine

“A sweet and slyly charming love story...adroitly explores the nature of friendship—and love...a wise and witty—and well-written—romantic comedy that is filled with heart.”
— Examiner.com

“The Decent Proposal is clever as it is hopeful…Kemper Donovan’s voice is original, captivating, and assured. This book is both a moving love letter to Los Angeles and a thoughtful rumination on what people can mean to one another.”
— Taylor Jenkins Reid, author of Maybe in Another Life

“A sharp, wise, and hilarious novel. Think ENTOURAGE meets Tom Wolfe with a touch of INDECENT PROPOSAL. . . . We loved it!”
— Lucy Sykes & Jo Piazza, authors of The Knockoff

“Impossible to put down, this character-rich, breakout novel will make your heart burst with love. You’ll turn the pages so fast you might get a paper cut.”
— Claire Bidwell Smith, author of The Rules of Inheritance

“Donovan takes what might have been a derivative tale and colors it with poignancy and self-discovery . . . Artful and arresting.”
— Library Journal

“Smart and observant. . . . A strong, omniscient narrator anchors Donovan’s deconstructed, opposites-attract love story where emotional stakes deepen as the story unfolds. References to pop culture, classic literature and movies—along with snappy dialogue and well-drawn characterizations, especially in the cast of supporting players—infuse a clever plot filled with surprising twists that will keep readers entertained and in suspense.”
— Shelf Awareness

“Donovan’s hilariously romantic debut novel is reminiscent of a modern Jane Austen-style story based in sunny Los Angeles. Dramatic and mysterious, this upbeat story is bound to become a classic with its enchanting setting and unforgettable, yet relatable characters.”
— Steamboat Today

“THE DECENT PROPOSAL isn’t the typical romantic comedy. In fact, in many ways, it’s more of an anti-rom-com… that’s what makes it a thoughtful and entertaining study in personalities and relationships.”
— WCBE's Shelf Discovery (Columbus OH)